Sea basing, you see, didn’t just spring from Sea Power 21. No, indeed it was the concept behind

the most extreme, and last, seaplane the Navy considered buying back in the early 1950s. Developed as a parallel track/hedge to the first (cancelled) super carrier, the , the concept that evolved was centered on a large, fast jet powered seaplane capable of near Mach 1.0 speeds at low altitude, able to deliver the growing inventory of nuclear weapons in the ’s arsenal. Operating from dispersed locations in the littorals, this “Seaplane Striking Force” would provide a secure nuclear strike force that would not be tied to large, fixed and vulnerable airfields like the B-36 and B-52.

The design would be challenging from a number of aspects. In designing flying boats, a real compromise is called for between competing requirements for both aeronautical abilties whilst remaining a capable sea-craft. Usually festooned with pontoons to promote sea-keeping abilities, sea planes usually encountered large amounts of parasitic drag, slowing them as a result. Powered was usually via prop (radial or turbo-prop) powerplants as the use of jet engines with the copious amounts of air they sucked in, were considered problematic in the waterborne environment.

Rising to the occasion was Glenn Martin, noted designer of other seaplanes and some not so worthy conventional craft. Convair was the other competitor for the design, which was to carry 30,000 pounds of warload to a target over 1,500 miles from the seaplane's aquatic "base" and incorporate a low altitude dash of a Mach 0.9. On October 31, 1952, the Navy awarded Martin a contract for two prototypes, with the company designation of "Model 275" and the Navy designation of "XP6M-1", plus a static test article. This initial order would presently lead to further contracts for six pre-production service evaluation machines, with the designation of "YP6M-1", and up to 24 full-production machines, with the designation of "P6M-2".

The Martin design team was led by George Trimble, an aeronautical engineer who as head of the Martin advanced design department; J.D. Pierson, a hydrodynamicist; and J.L. Decker, a aerodynamicist. Using the P5M Marlin flying boat as a starting point, they developed a revised hull design, with a length-to-beam ratio of 15:1, which was felt to offer the best efficiency in both air and water. The XP5M-1 Marlin flying boat prototype was rebuilt to test the new hull design, with this test aircraft designated the "Martin Model 270".

The original powerplant was supposed to have been a Curtis-Wright turbo-ramjet engine, but the engine development program ran into trouble, and so the decision was made to fit the 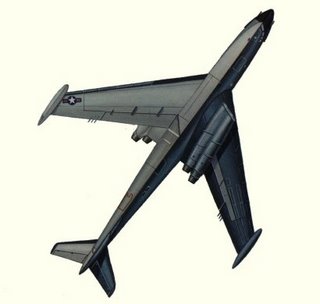 SeaMaster with four Allison J71-A-4 turbojet engines with 13,000 lb afterburning thrust each, mounted in pairs in nacelles above the wing near the wing roots. The J71 was a derivative of the J35 axial-flow turbojet, used on the Republic F-84 Thunderjet, and originally developed by General Electric as the TG-180 but passed on to Allison for full production.

The wings featured a sweepback of 40 degrees and ended in wingtip tanks that served as floats. The wingtip floats were also fitted with gear to help dock the aircraft. The SeaMaster was to have a pressurized cockpit and crew of four, including pilot, copilot, navigator / radio operator, and flight engineer.

The SeaMaster leveraged off Martin's advanced XB-51 attack bomber design, with features such as an "all flying" tee tail and a rotating bomb bay. The bomb bay flipped over in flight to expose munitions or camera payloads, and was pneumatically sealed to keep it watertight. The sole defensive armament was a remote-controlled tail turret with twin 20 millimeter cannon. 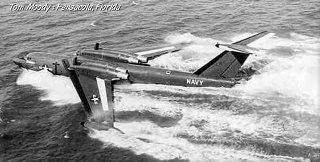 The first SeaMaster prototype was rolled out in secret on 21 December 1954, and performed its first flight on 14 July 1955, with Martin test pilot George Rodney at the controls. The flight test program revealed only one serious flaw: the engines scorched the rear fuselage, and so the use of afterburner had to be limited.

The Navy publicly announced the SeaMaster in 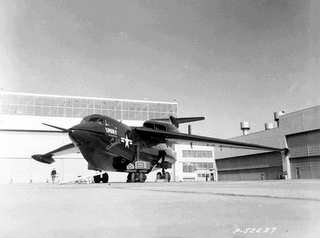 November 1955, inviting the press to witness the rollout of the second XP6M-1 prototype. Unlike the first prototype, the second prototype was fitted with operational navigation and bombing gear. The test program continued smoothly until December 7, 1955, two days after the death of Glenn L. Martin. During a routine check flight for the first Navy pilot, the initial SeaMaster prototype crashed into , killing all four aircrew on board. 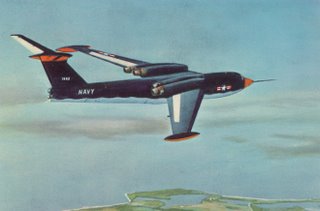 The post-mortem revealed a control-system fault that caused the aircraft to pitch nose down, bending its wings down and ripping them off. The second SeaMaster prototype was refitted with new flight instrumentation and ejection seats. Test flights finally resumed in May 1956. Unfortunately, the second prototype went out of control in November during a flight test of a modified tail configuration. The aircraft broke up, but the crew were able to eject safely. The problem was traced to an error in the design calculations for the tail control system. 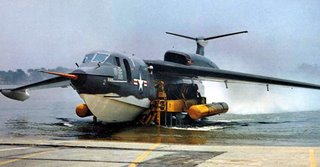 Despite the loss of both prototypes, the Navy still remained enthusiastic about the SeaMaster. A beaching cradle was designed to allow SeaMasters to taxi in and out of the water, and two LSDs (landing ship docks), two seaplane tenders, and the submarine USS GUAVINA were sent to shipyards to fit them as SeaMaster support vessels. A home base was set up at , near Elizabeth City, North Carolina.

The first pre-production YP6M-1 was rolled out in November 1957, with flight tests resuming 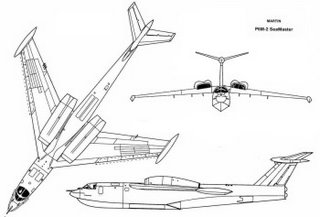 in January 1958. It featured afterburning Allison J71-A-6 engines, which were visibly "toed out" to reduce the effect of exhaust blast on the rear fuselage. The engine inlets were also moved back from the leading edge of the wing, presumably to reduce water ingestion. Five more YP6M-1s were built in 1958 and participated in an extensive flight test program, performing practice drops of conventional and (dummy) nuclear munitions, and evaluating day and night photoreconnaissance pallets. 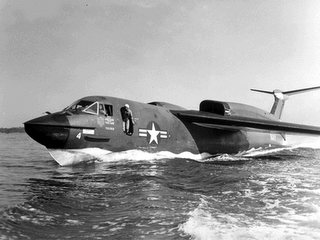 The first production P6M-2 was rolled out in early 1959. The production SeaMaster featured more powerful non-afterburning Pratt & Whitney J75-P-2 turbojet engines with 17,500 lb max thrust each, providing a total increase of 12,000 lb thrust, and permitting a substantial increase in gross weight. The engine installation was visibly different: the engine exhausts in the XP6M-1 and YP6M-2 had been staggered, but they were parallel in the P6M-2.

Early in 1959 production P6M-2's began to emerge from the Martin plant, and the full potential of the design was realized. Installation of newly developed Pratt and Whitney J75 engines gave 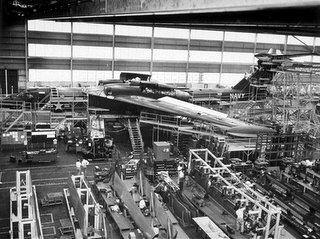 the P6M-2's nearly 12,000 more pounds of static thrust. This allowed the gross weight to be increased to 195,000 pounds from 171,000 pounds in the YP's. Increased weight meant a greater draft for the hull, which in turn necessitated raising the wing anhedral to zero degrees. Other improvements included full-visibility canopies and transistorized Sperry navigation and bombing systems. Production P6M-2's were equipped with midair refueling probes, and "buddy-pack" refueling kits were designed to fit inside SeaMaster bomb-bays, allowing fast conversion into tankers.

Pilots reported that the planes handled well and were capable of flying Mach .89 "on the deck." This was important, as the development of radar-guided surface-to-air missiles had made low-level flying an essential part of strategic penetration missions. The SeaMaster's wings were especially strong for the extra stress of high speeds through thick air; the aluminum skin at the wing roots was an inch thick. By contrast, the Air Force's B-47 could only manage about Mach .58 at low altitude, the newer B-52 only .55.

By the summer of 1959 all-Navy crews had begun flying three P6M-2's completed so far, and it appeared that operations could begin by early 1960. Rising costs, however, had led to two cutbacks, reducing the number of production items to eighteen, then eight. Then the bottom

The decision was and still is highly controversial. More than $400 million had been spent on equipping the SSF, but during its long gestation period newer technologies had emerged. The development of the Polaris ballistic missile and submarine had finally given the Navy its strategic deterrent. Further, the atomic powered carrier was going into service with long range nuclear capable strike aircraft, namely, the A3D Skywarriors and supersonic A3J Vigilantes.

Stunned, Martin engineers and executives tried to generate interest in an eight-jet transport version of the P6M, whimsically dubbed the SeaMistress, a huge nuclear-powered flying boat, and a supersonic seaplane somewhat resembling the Air Force Canberra. But there were no takers. Martin Chairman George Bunker announced that the company was now in the missile and electronics business. Fifty years of aircraft design and production was at an end.

Of the SeaMaster program little remains. The aircraft languished on the D Building ramp at for over a year after the cancellation before being scrapped. The "flying tails" and two rear fuselage sections were sent to Navy test facilities, while two sets of wing floats were used by a Martin supervisor to build a catamaran. Two tails, one fuselage section, and wing floats now belong to the .

Next week -- Liberty's over time to get back aboard the CV and get underway. The junior service has a tradition of taking Navy designs and employing them with success. This one though, did not give much hint of the heraldry that would follow in the skies over Korea in it's better known form...

Posted by Steeljaw Scribe at 18:57