Badgers, Buccaneers and Bears...(Pt 1) (A North Atlantic tale from the "good ole days")

(Note: I am in the process of moving the postings off the old site to this one, beginning with this series) 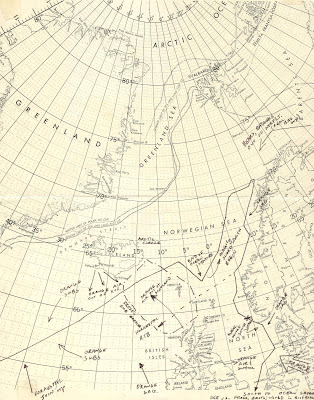 In his far off conscious he heard it – the incessant ringing of the phone on the bulkhead. Not just any ring either – more like a loud clattering and right now it was the most annoying sound intruding into his world. Wearily, he rolled out of the top bunk, carefully avoiding the low hanging angle iron that supported the flight deck above their bunkroom. Dropping softly to the floor he reached for the phone

“Ok, great...” he answered without much enthusiasm

Standing in his flight suit and stocking feet the young lieutenant took stock of the situation. Ike (ed. note: USS Dwight D. Eisenhower (CVN 69)) and CVW-7 had been at sea for almost three weeks now – normally no big deal. The difference was as soon as the battle group had passed Chesapeake Light (outside the entrance to Hampton Roads, VA) the embarked flag said he wanted an E-2 airborne around the clock until the BG pulled into 21 days hence. Again, it normally wouldn’t have been that big a deal if this was a normal 7 month deployment, but it wasn’t. The ship and airwing hadn’t even completed the REFTRA/TYT work-up cycle and here it was, headed for the , stalking the bear in its lair. Problem was his squadron, nicknamed the BLUETAILS for the blue/white sunburst they carried on their aircraft’s tail, were manned only to 60% of aircrew and no one knew the flag planned ‘round the clock ops. The end result was while the pilots got to fly with “guest” copilots (and thereby gain some relief from the aggressive flight schedule); the NFOs were being run into the dirt. The lieutenant had already flown three times in the last 18 hours and now was going up again.

Sighing softly he went the sink, deciding the best way to try and wake up would be to drag a razor across the 2-day old stubble. Holding the faucet open for hot water, he was greeted instead with the characteristic banging and shuddering of a faucet passing no water. Cursing softly, he wondered aloud as to how on the Navy’s newest nuclear carrier, he couldn’t even get water to shave. Grabbing his “poopy suit” (anti-exposure suit used in extremely cold climates in the event you have to bail out) he picked up his boots and wearily trod off to the ready room, just a couple of frames over from the bunkroom.

“Hey Tom, what’s the deal – ops promised a break since I took the AO’s flight for him?” he asked the duty officer.

Tom was a ground-pounder, one of the officers in the Maintenance Department but a non-flyer and one of the lieutenant's roomates. With a good-sense of humor, he gave pretty much as well as he got from the aviators...

“Sorry man, there’s all kinds of stuff going down out there and they want more E-2’s in the air for triple coverage; you’ll see on CVIC’s brief.” He answered. “Look at the bright spot – you get to miss Pop’s mtg with the other Div O’s this morning” “Pop” was the Maintenance Officer, a senior O-4 department head who while a decent sort as DH’s went, tended to be long-winded in his marathon meetings with the Div O’s.

The CICO (Combat Informaiton Center Officer) was the mission commander in the E-2 and responsible for successful accomplishemnt of all aspects of the mission. The CAPC, Carrier Airplane Commander, was responsible for the aircraft and safety of flight. In truth, the two overlapped and a good CICO knew all aspects of the Hawkeye just as a good CAPC had spent some time in the backend and well understood the mission. This was in studied contrast to Brand 'X' and the way the flight deck was isolated from the backend in the AWACS...

Looking at the schedule board, a large transparent grease-board mounted to one of the bulkheads in the ready room, the lieutenant reviewed the schedule, noting with satisfaction the backend crew – one of his other roomates, “Big Bird” and one of the last of the AIC-qualified enlisted aircrewmen still flying in E-2’s. A legacy of the Navy’s AEW program, of late the community was moving to an all officer backend crew as the reliability of the E-2C was so much greater than its predecessors and the mission was expanding accordingly. Both were very capable air controllers and Bird, like himself, was also a CICO. With this level of experience, there'd be little in the way of oversight needed and he could concentrate on the AAW picture.

“So, Lefty’s staying – man he won’t be happy...” Lefty was the current CAPC and would swap seats to fly as co-pilot. A good stick, Lefty still had a bit of temper when things didn’t go as planned – like today.

“Ready Two, CVIC” The “bitch box” (ship’s intercom) lit up. “Weather brief will be passed by phone; there will be no TV brief”

“OK, I see where this is going” the lieutenant noted “I’ll stop by CIC and Flag Plot, see what’s going on and we’ll meet up in flight deck control for the hot pump.” This was going to be a brief and go leaving the two aviators to find the necessary info on their own...

Sitting on the edge of his ready room chair, the lieutenant pulled off his flight suit, revealing the nomex long johns it felt like he’d been living in the past two days, and started to put on the poopy suit. He, at least was fortunate, having found an air force dry suit the parachute riggers had been given as a trial. Unlike the wet suit his pilot was struggling into or the big, bulky ventilated dry suits some of the older aircrew had, his dry suit was relatively light and most importantly, “breathed” while dry. Once it encountered water, the special cotton fibers would swell and provide a waterproof coverage. The downside was that at the extremities, the feet, wrists and neck, there was hard, tight fitting rubber to provide a seal against the water which could get uncomfortable on a long flight.

Having read "Bridges at Toko-Ri" to the point of memorizing it, he smiled grimly at a kinship with his predecessors and their struggles with anti-exposure suits "back then."

With the dry suit dance completed and nomex flight suit back over it, he began to feel like a kid again, back in Nebraska being dressed in a snowsuit before going outside. Bending stifly, he put on the parachute harness, combination life preserver and survival vest. Once finished, he was ready to shuffle off to maintenance control and CIC, helmet bag in hand to see just what the big deal was.... 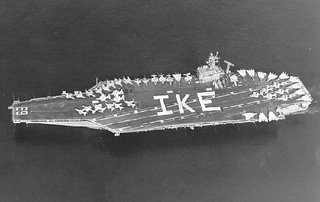 Posted by Steeljaw Scribe at 20:47