“Somewhere” the JG heard the MO mutter, “somewhere under all that crap is a pony and we have to find it, won’t we Will…” he said looking directly at the QAO.

“Oh great” he thought – “yeah, this is going to be one for the books if it doesn’t kill us in the process…” he replied. Turning to the stairs he headed topside for the brief wondering what other mischief the Fates held in store for him. Somehow, he thought, they’re just getting started…

Returning from the flight some 5 hours later, the JG beat a hasty retreat from an increasingly windy and cold flight line to the relative “warmth” of the hangar bay. Relative in that one’s breath could still very much be seen and if one wasn’t careful, it was very easy to slip on the various ice patches on the bay floor.

Over in the corner, the “penalty box” as he came to think of it, sat the squadron’s newest acquisition – BuNo 160992; AG 015. Her wings drooped to allow full access to the tail of the aircraft; the line crew was busy washing the aircraft down, valiantly working to remove the layers of bird dung that heavily encrusted her upper surfaces. Mixed in with the line folks were other available bodies drawn from across the maintenance department – AT’s and AE’s from his old division, the Avionics Division, mechs and airframes personnel from Aircraft and even an AZ and AK or two from maintenance control. Chiefs and airmen, all struggling to find the MOs pony.

“Well sir” his QA senior chief approached “it’s not as bad as we thought on first look – its worse.”

“How so Senior?” he replied, with a sense of sinking despair.

“Interior is gutted – Avionics has a real project on their hands since it doesn’t even have a computer cabinet in her. You’ve seen all the stuff missing outside...”

“Well, the documentation is missing on a good part of that. All afternoon folks have been showing up from the Wing and the RAG with shopping carts full of odds and ends – ‘this is for 992’ was all that was said. Most of the parts don’t have any VIDS/MAFS. I don’t like it; I really don’t like it...”

“I hear you Senior, but we don’t have much of a choice now. How are we going to work splitting QA between here and Kef? It’ll be no picnic either place, but we really need our best folks here given...” He ended with a lame wave towards the aircraft.

“Working w/MCM it looks like we may have some volunteers to go to Kef w/us and we’ll be supplemented here with the RAG’s folks – QA and other shops worth. If you have a minute I think you should take a look inside for yourself”

Walking around the port nacelle and ducking under a wet wing, the JG stepped up to the main entrance hatch, resting on a stack of pallets because the hatch brace was missing.

Reading his thoughts, his senior chief said “Yes sir, it only gets better inside.”

Working his way up into the forward equipment compartment (FEC), the JG surveyed the scene with as dispassionate an eye as possible. Directly across from the main hatch, the big radar coaxitron was missing, as were several pieces of waveguide leading up to the rotodome. So was the big condenser package that made up the equipment cooling or vapor cycle system. Aft and to his right, the big cabinet that housed the processors, memories (8K wire core memories) and I/O units that made up the heart of the ATDS system was missing. Those three items alone were huge – little else in the backend could be worked upon until those items were installed and working. Looking further aft, back into the CIC compartment, his end of the plane, all the main display units were missing – big holes like empty eye-sockets in their place. Naturally the parachutes and seat pans were missing – if they had even come over from the other side installed the PR's would have pulled them now anyway for inspection and safe keeping. Turning towards the front he noted that all the PDS boxes were missing on the port side of the FEC were gone – no surprise there as many of the other aircraft in the squadron were likewise stripped of those boxes for their sister outfits. On the starboard side, at least most of the high-power boxes and cabling for the radar were still in place, save the modulator (there’d been a rash of failures wing wide of late, so again, no surprise there). Up front, the cockpit was relatively intact (though unbelievably filthy) save the CAINS interface which was – missing. On the way back he poked around the hydraulic “Christmas tree” noting with concern the heavy layer of old hydraulic fluid that clung to everything.

Stepping back out of the hatch he slipped and lost his balance owing to the unnatural angle the main entrance hatch sat at. Having left his helmet on out of habit, the worst that happened was a healthy scratch on the reflective tape and a sense that he’d just been kicked by the plane, which now stood to the side, glaring menacingly at him.

Walking back to maintenance control they discussed further details about the upcoming det and 015 as they were now calling it. Already a large sheet of paper w/ “015” was prominently displayed on the pilot’s side window.

“Well Senior, I’d hate to be the crew that had to fly her first – I know our guys are going to bust their tail fixing her, but something tells me it won’t be an easy job, for anyone. Glad I’m going to be in Kef for this one.”

Inside Maintenance Control a small group of aviators had gathered with the XO and MO. “Uh oh, this can’t be good” he thought.

“Wilbur, get on over here” the XO called out in his usual half-laughing manner. “You’re my CICO for the flight up to – we’re leaving Saturday as part of an early det. (“Crap!” he thought to himself) Rest of the squadron will arrive about two weeks later. We’ll split sorties with the Reserves until the rest of the squadron arrives. The early maintenance det leaves tomorrow.”

Of course, ‘tomorrow’ was Friday...so he had exactly one day to get everything finished before leaving Saturday, including packing which he hadn’t even started yet. On the flip side though, he would get a leg up on his fellow JO's in the flight hour department.

Turning back to the assembled group the XO continued “Here’s the route of flight – from here we stop by Bethpage for a short stay to pick up some PDS boxes and then press to . We’ll RON there, and then strike out to Sonderstrom on the west coast of Greenland, refuel and then across the icecap to . It’ll be a couple of very long legs with spotty comms (mostly VHF and HF) and it’ll be damn cold at altitude and on the deck. MO, let’s make sure each aircraft has a bowser with them.”

At the quizzical look from the JG the MO explained “The bowsers are needed to service the props – at the temps we’re expecting the prop seals on these prop domes have a tendency to shrink and bleed hydraulic fluid, big time. Also remember to take all your flight gear indoors with you when we land, otherwise it will get cold soaked almost immediately and be too cold to wear...”

Further discussions continued about crosswind limits and field arresting gear, weather and more. Finally someone asked “Hey XO, do we have to take our poopy suits with us?”

To a chorus of groans the answer was yes, but we wouldn’t have to wear them until we started flying missions.

Later, sitting in his car out in the lot, the JG turned the day’s events over in his mind while running down a mental checklist of tasks to be accomplished before leaving. Well down at the bottom of the list were any and everything to do with that day’s acquisition. Just as well, he thought, there are bigger fish to fry. Pulling out of the parking lot he began framing how he was going to break the news to the girl he’d just started dating that he was going to be leaving much earlier than planned. Her reaction would speak volumes about any future they might have.

And 015? Well, a small crew was already making steady progress at assessing her state that evening. When he left Saturday, he was surprised to see the MODEX already painted on her nose, squadron seal and Battle ‘E’, Safety ‘S’ and AEW Excellence awards applied and the beginnings of the sunburst on the tail. A long worktable was setup along one side with piles of documentation on one end and parts at the other. An intermittent stream of personnel were entering and leaving, accompanied by muffled shouts and the occasional, well, actually frequent curse. The resurrection of 160992 was well and truly underway. 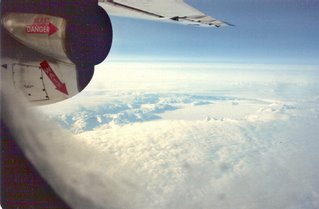 Yes, that's ice on the inside of the window...

Posted by Steeljaw Scribe at 15:08