(Note: I am in the process of moving the postings off the old site to this one, beginning with this series) 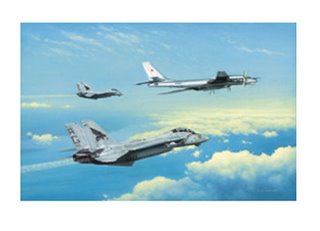 “Alpha Whiskey, Alpha Romeo, this is Alpha Bravo – launch alert 5 and 10” In the background of the embarked flag’s voice call (‘Alpha Bravo’) the CICO could hear the gonging of the ‘General Quarters’ alarm. The ESM system lit up as air search and fire control radars from the fleet came on line the fleet was coming to a heightened state of battle readiness…

The first tracks had just been ID’d as more Badger Charlie Mods, each with a single AS-2.

As the fighters were finishing their reports, suddenly the CICO noticed a large smudge of video starting to appear, almost like someone with a grease pencil was furiously scribbling a line pointed toward the battle group. Soon another appeared then a third. Crap, he thought, someone was deploying chaff…

Cursing under his breath, the CICO started adjusting the radar controls to minimize the impact of the chaff. Just then, jamming strobes began appearing. Making some quick mental calculations as to who, what and where the jammer was ( air, not Soviet; probably the NKC-135) he added processing controls and directed a change in station position and altitude to the front end.

In the meantime, the apparent Badger stream raid was continuing. His ACO was running one of his F-14s through the incoming tracks to make ID’s and tying on the already overwhelmed remainder of fighters as the stream raid approached the battle group. To make matters worse, the lead elements had apparently found one of the chaff corridors and were running down the middle of it, making tracking that much more challenging.

Pairing lines (missile engagement lines) began to show up on Link-11 as the AAW cruisers picked up the inbound raiders and started targeting. The fact that they were locking up the Soviets with fire control radars would be something the flag staff would negatively debrief later, being a violation of INCSEA agreements, but there was a bit of tit-for-tat given the use earlier of targeting radars by the Bears. The CICO just hoped (prayed) in the heat of battle that no one would get itchy trigger fingers...

Help was going to be needed and soon – a quick call to FID’s E-2 had him up on Wing 12 (the east coast E-2 wing’s base frequency) for some cross tell and assistance.

“Tigertail, Bluetail, you up?”

“Rog – things are heating up and if air comes out would you be able to work that raid while we work the real-world threat? I’ll need all the DLIs and can split the A-7’s with you if you also take the Sea Harriers. Not optimal I know...”

“Tigertail copies – works for me. I’ll coordinate w/Alpha Sierra and switch Alpha Whiskey in a few”

Anticipating a large raid comprised of F-5s, Buccaneers and Marine A-6s staged out of Norway, the CICO had coordinated with his counterpart on the FID’s E-2 (Tigertail, VAW-125) to leave the ASUW mission, which had pretty much been a dry hole as there were no orange surface units in play yet and the only Soviet on the surface was an AGI that lay well over the horizon from the battle group. Brining the other E-2 up would provide not only control for fighters (A-7s and Sea Harriers) for the air raid, but another tracker for the real world event too.

Almost on cue, a mass of video moved off the Norwegian coast, headed for the chaff corridors, already occupied by the inbound Badgers.

“Whiskey, Alpha Whiskey, Uniform 2 checking in. Uniform 2 has control of all Bravo stations for raid.”

By now he had counted over 30 Badgers inbound with the first now breaking the 50 mile circle around homeplate. The first 2-3 pressed inbound while those following broke off and started an outbound turn and climb. What escorts they had reset to catch and escort any others that continued inbound. Fuel was becoming a factor now as well and tankers were located and vectored with stern warnings to provide minimum give.

“Alpha Whiskey, Uniform 2, numerous bogeys, inbound, very low, very fast – unable CAP” That had to be the Buccaneers, the CICO thought to himself...having worked against them before they were notorious for getting way down on the deck, well below 100 ft, some claimed they were down to 10-20 ft above the water and busting in at max speed. That low and fast no fighter was going to catch – better leave it to the missile shooters and most likely, CIWS...

The words crashed in on the AAW circuit before Uniform could finish its report.

VAMPIRE. The word that chilled the heart of and CICOs.

VAMPIRE. Code for an inbound ASCM. Immediate action required, no, demanded. Bad enough to here it in the simulator or exercises, even when prefaced by “Exercise” Now, to hear it in its raw, un-qualified form a chill ran down the CICOs spine.

“Now what?” he thought

And one by one, each of the shooters came up on the net to report that it had broken its engagements – on the link the pairing lines the CICO had been worried about disappeared one by one.

“Great”, he thought, “there was the itchy finger; probably totally focused on the air raid and forgot to use exercise terminology. Didn’t do my heart any good and probably darn near caused a coronary in Flag spaces. Someone’s gonna get fired over that...”

By now the air picture was a couple of pulsating masses of video. North of the combined CVBG was the mass that constituted the Soviet raid while north-east was the air raid. Mixed in and discernable only by either their IFF squawks or Link4 symbols were the fighters and other air wing aircraft.

Slowly, excruciatingly slowly as the minutes and radio calls dragged by, the two masses started to elongate and eventually resolve themselves into separate streams of outbound aircraft on their return legs. The air on (relatively) short runs back to their Norwegian bases and the warmth of the O’clubs were many tales would be spun about below masthead flybys (and one below flight deck flyby that almost ended in a SAR). The Soviets back to their bases with somewhat longer runs, but to receptions no doubt as enthusiastic as those in . There would be a changeout of the Bears until the AGI arrived on station (which would eventually be joined by a Krivak and Kashin DDG). More gas was launched and anxious fighters refueled for recovery, except for the lucky two VF-143 birds that would be triple cycled (3 x 1+45’s stuck in drysuits and strapped to ejection seats, bet that was one MO who was going to get an earful, especially since CAG was in one of the not so lucky ‘Dawgs).

As the tension eased airborne, waves of fatigue hit the CICO who had been running on pure adrenalin for the last few hours. Now, at last, his relief was airborne and turnover accomplished. Of course, the drama for the day wasn’t over as the weather had closed in again and the ball call was punctuated with “Clara” followed by “Keep it coming Hummer, we hear you” from the LSO’s. Fortunately they trapped on the first pass, catching the two wire which guaranteed a back and forth with the LSO on debrief. As for himself, the CICO barely remembered the walk to CVIC to debrief, dropping off his logs and notes. Dragging his frame back to his stateroom, he collapsed face down in his bunk, still in his flight gear and fell into a deep sleep.

In his far off conscious he heard it – the incessant ringing of the phone on the bulkhead. Not just any ring either – more like a loud clattering and right now it was the most annoying sound intruding into his world. Wearily, he swung his leg around and kicked the receiver off the hook and went back to sleep... 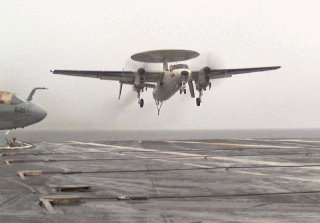 Posted by Steeljaw Scribe at 08:48