Reflections - Sympathy for an HT

Naval Aviators (and by extension, Naval Flight Officers), of the tailhook variety that is, tend to be a peculiar lot. On the one hand we live to fly “at the boat” and yet, the prospect of actually doing anything besides actually aviating is well, anathema – for some. Early on the behavior was learned at the feet of our elders – the sage department heads and XO and of course, the grand wizard himself, the CO (with occasional helpings from the local deity – CAG). GQ station? Rack or Ready Room, door locked and flicks on the reel (that’s movies on a reel-to-reel projector for the iGeneration…). Later, when offered the opportunity to serve as ship’s company, we feign the vapors and allege as how we will “be forever scarred and isn’t there a spot on CAG staff or (shudder) even an afloat staff and why do I have to go back to sea but not in a squadron?” Well, some that is. Others, think differently.

For you see, it is during that tour that one comes to work with a whole new breed of creature in a way that the temporary residents of the air wing never could – ship’s company. An assortment of black shoes, brown shoes (of the, you know, VP type), and nukes. Ah yes, the nukes – but that’s another story. Maybe. One comes to work and appreciate the skills and sacrifice of such a diverse clan made up of SK’s, OS’s, QM’s (don’t get me started), IC’s, AB’s, BM’s and HT’s amongst others. Now each has their own field of specialty – the SK’s were supply folk, the QM’s did the navigation grunt work (for the ‘gator and his henchmen, the ANAV and QMC were not believers in GPS and demanded a full day’s navigation work, including celestial, the taskmaster…) and the HT’s, well, the HT’s were the handymen of the ship – doing the dark, dirty, hot, nasty jobs that kept the gleaming city of aviators and sailors afloat and functioning.

So it was that YHS found himself midway on another numbing at sea period as navigator on the second ship of the renowned Nimitz-class, the USS Dwight D Eisenhower (CVN 69). Now one of the many responsibilities of the ‘gator and the Nav Department is the material condition of the navigation bridge (home, as it were to the CO, ‘gator and bridge watch teams during underway periods) as well as several other spaces through the island. Included in that roster of spaces are the head (“rest room” for our Air Force buds) that is just aft of the port side entrance to the Nav bridge and abreast an area quaintly known as the “blue tile” area – so named for an area that is a pathway for distinguished visitors on their way to visit the CO. Ergo, it is an area to be kept spit/polished clean and shiny. Or else. And it was, of course, owned by the Nav department.

Funny thing about heads – just like their shore-based counterparts found in dwellings across the land, there is a requirement to vent gasses overboard. And just like their shore-based counterparts, they can get blocked. Not necessarily by bird’s nests, but any one of a number of other devices including corrosion or misplaced rags. The end result is the same – noxious odors like uninvited guests settling around one’s self.

So it was during this particular underway period that the faint beginnings of a malodorous presence was detected by the ‘gator who, ever alert for that which would offend the big CO, made haste to summon the denizens of Nav, posthaste, to clean the offending head. With much elbow grease and disinfectant, they applied themselves and the odor withdrew, for the moment. Alas, as it was summer and this was the warm waters of the , temperatures crept inexorably upward and the odor reasserted itself. This wicked game of olfactory hide and seek continued over the next day, day and a half and finally drew the baleful glare of said CO upon the ‘gator. “Fix it” was the non-verbal communication – passed and quite clearly received.

The Chief Engineer was summoned and with him a young hull tech (HT). By this point in time, the odor, an overly ripe, heavily ammonic one, had manifested itself throughout the blue-tile passage way and hung like a curtain in front of the entrance to the bridge. With SECNAV hisself due on the morrow for a visit, the pressure was well and fully on. The Chief Engineer departed the premises to consult his oracle, leaving the HT to continue the search and the ‘gator in dark funk. The sun was setting in the west – and a glorious setting it was, in all manner of vermilions and gold and yet, the ‘gator – he a connoisseur of such, was unable to appreciate as he and the HT began an expanding circle search for with to locate the source of the odor.

Let us hit the “pause” button for a moment here and further describe the lay of the land. At twenty some years of age, IKE was not quite the spring chicken she was when the ‘gator first boarded her as a young Ensign with his first squadron, the Bluetails of VAW-121. In the intervening years sensors and other equipment had been added and removed. Supporting those systems, like great bundles of ganglia, were cable runs located in the overhead. When he and the ship had been young, such was the paucity of cables in the overhead that he could walk relatively upright with little fear of busting his noggin at the top of his 6’4” frame on said cables. Now, twenty years later and thick, twisted bundles snaked their way down through the island to the main part of the ship below – obstructing what lay behind them to all but the most determined of searches – the same kind normally reserved for finding the rear-most sparkplug on a V-8 shoe-horned into a cavity reserved for a wimpy 4-cylinder. The kind that required fingers of, oh, a foot or so in length. With eyeballs on the end to better see what one was looking for.

So, it was while thinking evil thoughts and contemplating the immediate future, of a visiting SECNAV having to be escorted to his bridge through his spaces wearing a HAZMAT suit because of the increasing toxicity of the air that he turned to the HT and asked if he could sense any differences in the intensity of the smell, all the better to try and locate the source.

Whereupon, said HT, who must have been all of a very young 18, paused, and turning to the ‘gator (with the most mournful look the ‘gator had ever beheld), said “sir, I’ve been sniffing sh*t for so long I can’t smell anything anymore”

And with that, the ‘gator’s heart melted and his dark mood fled as he said with a slow smile “Well son, I’ve been shoveling sh*t for so long now that together we ought to be able to locate it by sight” and they recommenced the search this time starting with a careful inch by inch search in the passageway’s overhead. And it was while doing this, stretching from the top of an overturned wastebasket (and hoping the Safety Nazi’s wouldn’t put in a surprise appearance) that the ‘gator felt something crumble under his hand. Grasping some more a cascade of brown powder fell on the ‘gator and a surprised HT – both of whom were quickly reduced to retching coughs in the face of a flood of gasses, freed from the now open vent.

Sometime later it was determined that the offending vent pipe had so many coats of paint sprayed on it over the years that that coating was all that was left when the original pipe material had rusted (‘scuse me, corroded) away. A repair party was summoned and by daybreak, a new vent pipe was installed, restoring the decorum of the sacrosanct area well ahead of SECNAV’s arrival.

And the ‘gator had new found appreciation of the great American White Hat (aka sailor) to add to his esteem for the aviation wrench turners and box swappers with whom he was previously acquainted. As well as a story to relate to you, gentle reader. 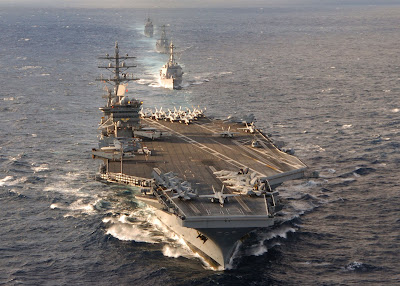 Posted by Steeljaw Scribe at 00:01