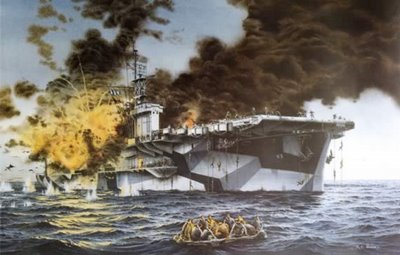 After successfully fending off the superior surface force of VADM Takeo Kurita’s Center Force, “Taffy 3” is now defending against a surprise air attack that has lasted some 40 minutes already. One of the features of this attack is the use of suicide attacks. Kamikazes. In the midst of battle, St Lo is struck by a plane flown by Lt Yukio Seki. Penetrating the escort carrier’s unarmored flight deck, the plane and its bomb explode in the port hangar bay, igniting a massive fire with secondary explosions. When the bomb and torpedo magazine detonates, Lo is engulfed in flames and sinks 30 minutes later. Barely 6 days later, the carriers Franklin and were struck by suicide aircraft. Both were forced to retire for repair before rejoining the fleet. This emerging threat, kamikaze attacks, were a hint of what was to come as the Fleet closed on the Japanese homeland. The urgency for getting Cadillac’s capabilities operationally deployed was being underscored by increasing losses in the Pacific...

Recognizing the importance of the Cadillac system, an early decision was made by the Navy to establish production coincident with its development. To be sure, this imparted significant risk to the program, but in light of its benefits this was deemed acceptable. Development was undertaken in earnest shortly after approval in May 1944. Using ground-based radar located atop and operating at low power to simulate the APS-20, work on the airborne elements, particularly the relay equipment was well underway. This arrangement allowed prolonged simulation of the air- and ship-board environment, contributing significantly to the shortened development timeline.

Progress was measured in the completion of each of the 5 developmental sets envisioned. The first set flew in August 1944 – barely 3 months after the approval to begin work was received. Each subsequent system saw incremental improvements over its predecessor with the improvements folded back into the earlier models. By October a full-fledged demonstration was flown for the benefit of USAAF and USN leaders. These demonstrations consisted of 2 aircraft and 1 shipboard set and were flown out of . By all accounts, the demonstration was extremely successful, which boded well for the production units, forty of which had been ordered by the Navy in July 1944.

As additional developmental sets were completed, permanent sites were established in Bedford (2) and MIT (1 – originally scheduled for Brigantine, NJ). The latter was established at MIT for the purpose of evaluating the system in the heavy interference conditions expected in the operational environment. It was in this environment that the first major problem was uncovered as the system was found to jam itself – interference was so bad that rotational data as transmitted by the double-pulsed coding and passed over the relay link was virtually completely jammed. An extraordinary effort though on the part of the development team led to a triple pulse encoding scheme. With little time to fully test this new set-up (there was considerable rework in the synchronizers, relay receivers and decoders to be accomplished), the third set was packed off to formal Navy trials at the CIC Group Training Center, Brigantine, NJ that started in January 1945 – only two weeks behind schedule.

In December, at the height of the crisis over finding a means to address the interference problem, DCNO(Air) disclosed to Cadillac team leaders the urgency by which their equipment was required to combat the rapidly growing kamikaze threat. Even though Cadillac was already at the top of the Navy’s electronics development requirements, with the increased need, the Navy made available substantial numbers of officers, technicians, draftsmen and even a special air transport system to facilitate delivery of parts and personnel.

On the production side, a flexible system of generalized target dates were crystallized as designs firmed up permitting incorporation of changes as experience was gained with the development units. To be sure, there were likely gross inefficiencies induced, most in terms of cost, which would be unacceptable in today’s procurement climate. Additionally, anything less than the very high priority Cadillac carried would also have hampered successful completion. Nevertheless, a production schedule was agreed to in June with BuAer that would start deliveries of operational systems with two in February 1945. This was subsequently modified in November for initial delivery of 1 set in March 1945 followed by 4 in April and then 8 per month afterwards.

Not long after starting operational evaluations at Brigantine, more problems were discovered, 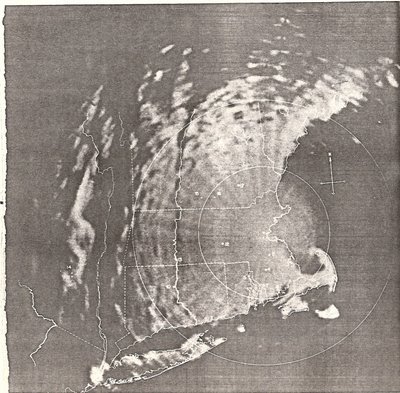 centered primarily on interference issues in the shipboard environment. Again, most of us today are well aware of the hazards the witches’ brew of RF in the CV environment entails. Mixtures of high-powered radars operating at different frequencies overlaid with HF, VHF and UHF voice comms provide an extremely challenging environment to develop and deploy a new system, even with the benefit of fifty plus years of experience. Without the benefit of that experience, the roadblocks encountered are not surprising. More modifications were made to the shipboard system with filters to screen out the extraneous radiation. Additionally, as more experience was gained with the APS-20 radar, it was determined that anti-clutter filters were needed to reduce the effect of large clutter discretes from the sea’s surface in and around the immediate vicinity AEW platform (typically out to 20 nm from ownship).

On the west coast, training in the TBM-3W for pilots and crewmen was undertaken by the Fleet Airborne Electronics Training Unit (FAETU) in preparation for deployment. In the meantime, 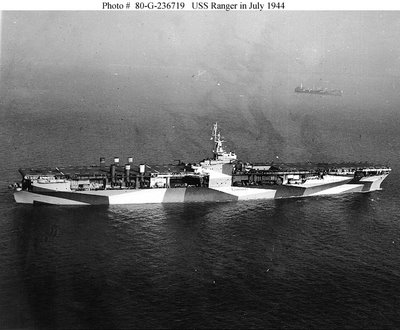 the USS Ranger (CV-4), recently returned from delivering aircraft to allied forces in Casablanca, entered Norfolk Naval Shipyard 17 May 1945 for a six-week overhaul, during which a CIC and the Cadillac equipment were installed. Underway again in July, she arrived at on July 25th where she loaded aboard her airwing. This airwing was different from the conventional wing in that it included several developmental concepts; among these were the Cadillac configured TBM-3Ws and the Night Air Combat Training Unit from Barber’s Point. By August 1945 she was in Hawaiian waters conducting final CQ prior to leaving for Japanese waters when the war ended.

With the end of the war, Cadillac was almost, but not quite completed. While the carrier-based component did not have a chance to prove itself in combat, the utility of carrier-based AEW was so clear and its applications so far ranging in impact that further development and deployment would continue post-war, with deployments on Enterprise and Bunker Hill. In addition to the carrier-based component, a second development was begun under Cadillac II for a more robust airborne capability. That will be the subject for next week’s installment.

Posted by Steeljaw Scribe at 19:41